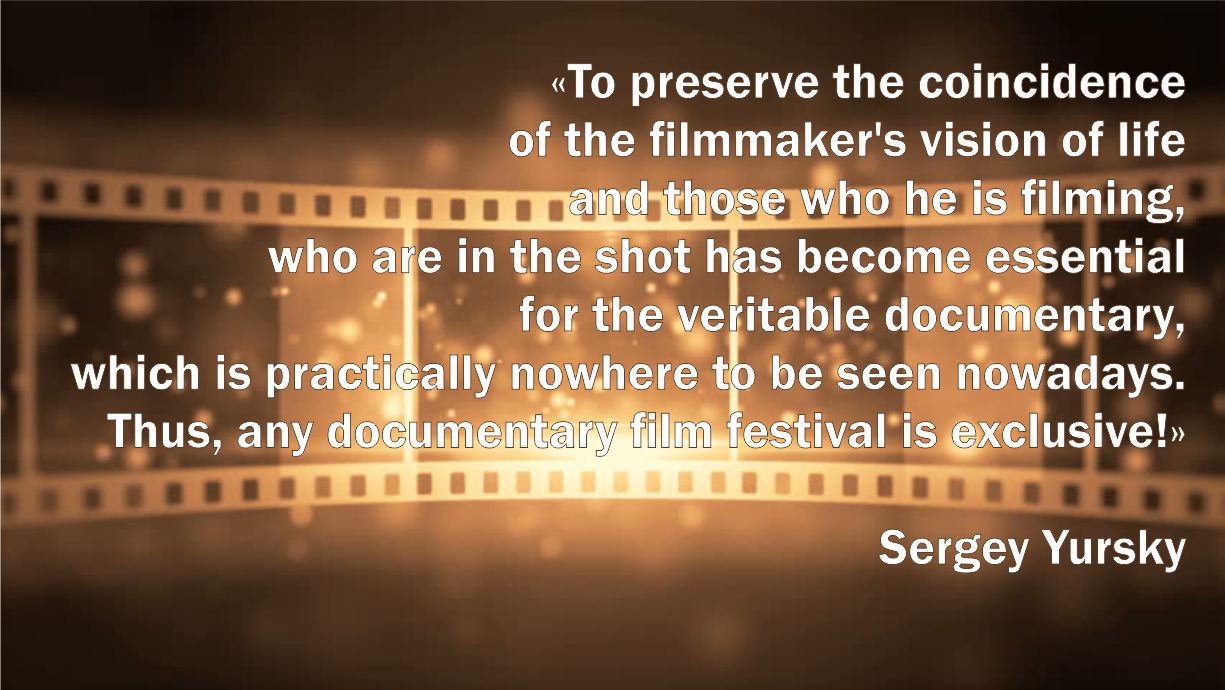 2.1. The goal of the Festival is popularizing and promoting documentary films, including those related to Crimea, as an effective factor for the development of cinematography in the Republic of Crimea, and for increasing the role of domestic documentary in the extension of the multicultural ties.
2.2. The aims of the Festival are:
2.2.1 Acquainting the Crimean audience with the best works of Russian and foreign documentary, including those related to the history and culture of Crimea;
2.2.2 Creating a platform for filmmakers for the exchange of experience and ideas;
2.2.3 Promoting the revival and development of documentary in the Crimea;
2.2.4 Organizing the conditions for creative communications between the filmmakers and the audience, in first line, with young people;
2.2.5 Attracting to cinema halls people of different ages and nationalities;
2.2.6 Discovery, encouragement and promoting of creative achievements of Crimean filmmakers in documentary;
2.2.7. Promoting the works of young filmmakers at the festivals.

5. CONDITIONS OF PARTICIPATION AND DOCUMENTATION

7. PARTICIPANTS AND GUESTS OF THE FESTIVAL

7.1. Questions related to the invitation of Festival guests and participants, the duration and conditions of their stay and accreditation, are determined by the Festival Management.
7.2. The Festival Management invites only one crew member to present a film from The Main Competition Program – director or producer, and covers the following expenses of this representative of the film: travel expenses by air from to the Festival venue and back, hotel accommodation, food and transfer during the whole period.
7.3. Members of the crew must participate in the presentation of the film on the day of the screening, in other Festival events.
7.4. Terms and conditions of other guests’ stay at the Festival are specified in their personal invitations.

8.1. The Jury awards the following statuette «CrimeaDoc» to films in the Main Competition
- Grand-Prix – to the best film of all nominations
- The best documentary film
- The best TV documentary
- The best film in the nomination «Crimea on the documentary screen»
- The best Debut
- Special Diploma of the Jury (awarded according to the decision of the Jury)
8.2. The Organizing committee and the Management can award the following prizes:
- Special Prize of the founder of the Festival;
- Special Prize of the partners of the Festival.
- Other Prizes.
8.3. Prizewinners are expected to attend in person the awards ceremony.
8.4. Each film from the Main Competition and Out-of-Competition Program (except for Retrospective screening) gets a Certificate of Participation.

9.1. Participation in the Festival presupposes compliance with all the articles of the present Regulations
9.2. Address of the Management of the V Crimean Open Documentary Film Festival «СrimeaDoc» is 37 Krylova Street, Simferopol, Crimean Republic, 295001, Russian Federation.

E-mail: This email address is being protected from spambots. You need JavaScript enabled to view it.
Website: http://крымдок.рф